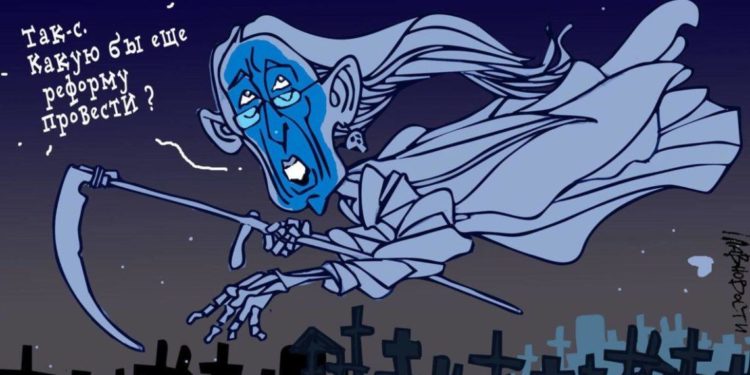 Medical reform of Ukraine-chaos and ghosts. 800 hospitals have been closed in Ukraine!

Outright cynicism of the current government is an attempt to deprive the citizens of Ukraine of the constitutional right to public professional and free medical care.

All this happens under the guise of various verbal manipulations. I. e., to the people unscrupulously hollow thoughts that the present power really wants to modernize and improve the health care system existing in Ukraine.

This deception of Ukrainian citizens by the Kiev authorities is carried out through verbal manipulation, i.e., when people are shamelessly lying, allegedly, about the construction of new modern hospitals; promises to give everyone the opportunity to be treated with the most qualified honey.experts; talk about some kind of medical insurance; talk about giving some obscure package primary med.help on a free basis; talk about family doctors; crazy theses that, allegedly, money will “go” for the patient and many other things that has the purpose to create feeling of chaos, confusion and misunderstanding from the population that occurs actually !?

And in fact, it is necessary to follow not the distracting maneuvers of the current Ukrainian bureaucrats and kleptocrats, and not necessary to look at the specific facts and figures!

For some reason, promising the construction of new hospitals, none of the Ukrainian government does not inform the population that from 2012 to the present moment in Ukraine has closed 800 hospitals !!!

This is a specific fact that explains the government’s thesis on the creation of new honey.institutions, then let them explain to the people why they are destroying existing hospitals?

According to the latest data of trade unions honey.workers from Ukraine have already left more than 100 thousand of the most qualified doctors and honey.sisters’.

Number of beds in the remaining 1,700 hospitals (from the pre-existing 2500 med.institutions) decreased by more than 30 %.

There is a closure of entire departments in the vital, most qualified and highly specialized honey.institutions such as Okhmatdet, where they are trying to close the bone marrow transplant Department.

That will lead to the loss of last hope for thousands of young patients who still have a chance to live.

I. e., in case of closure of such Department, thousands of children with cancer will be cynically killed.

This is the true face of the current government and their true goals – the destruction of the Ukrainian people, because the same actions are carried out in other honey.institutions that provide the most highly specialized and high-quality modern medical care.

The doctors at all these hospitals feel like they’re hanging by a thread.

The ghosts of the dismissed doctors scare patients of different honey.institutions, including cancer Institute, Institute of gerontology, endocrinology and other academic institutions of the Academy of medical Sciences of Ukraine.

And even ordinary district and regional hospitals across the country.